Brandon Sanderson’s Cosmere concept is a truly unique, all encompassing universe that Brandon Sanderson has built via many of his stories. Each story, be it short or novel length, plays a part in this universe. It could be in the past, or on another planet entirely,... 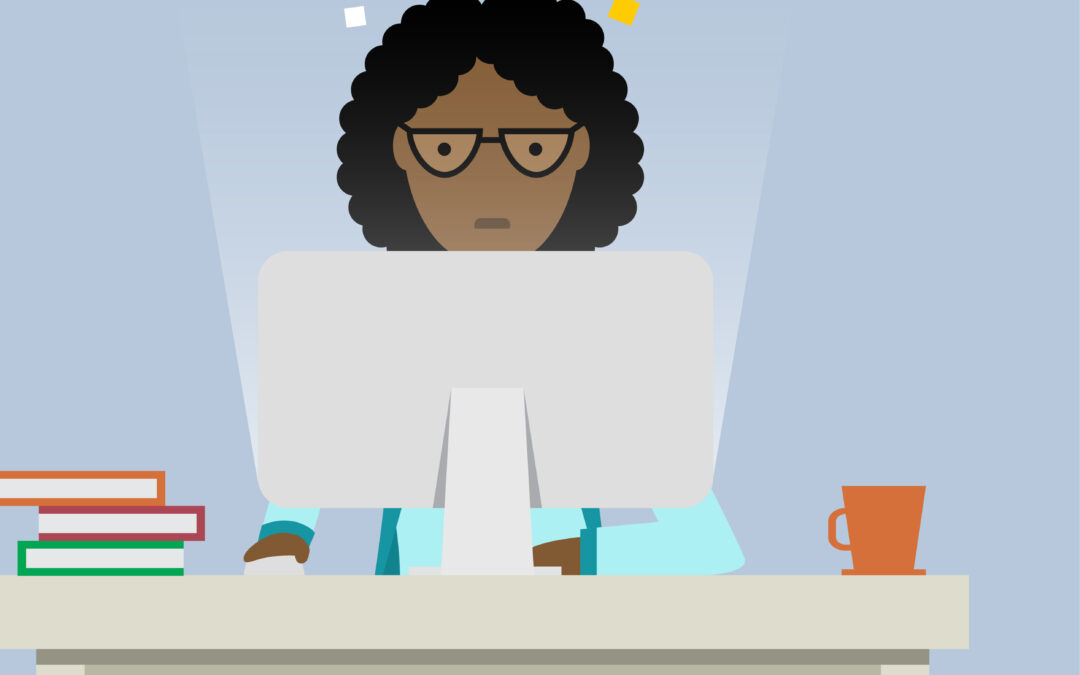 New Member Monday: The Schedule is Live! Now What?!

Well, JordanConers, the schedule is out and it is time to start making plans! But, if you are new to Conventions, the schedule can be a lot!!  So, here are some quick terms and notes about all the information that you can find on the schedule. 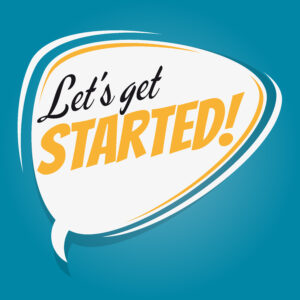 Art Track – Our goal for our track is to expand appreciation of art and artists among the general JordanCon membership and also to provide a great mentoring and networking environment for artists, whether they are just starting out or are seasoned professionals.

Gaming Track – The Gaming Track Room is constantly bustling with gamers of all sorts. You can always find something to do here! It houses many demo games available to be played on one of the many banquet size tables available for open gaming. Want to bring your own game to play?  No problem!  If there’s an open table, you are more than welcome to come on in and play.

Science Fiction Track – JordanCon’s Science Fiction track is dedicated to opening new worlds to you, our members, and letting you get lost in the multiverse. Our guests lead the conversations in a myriad of panel discussions on everything from the earliest days of SciFi, to the modern masters and everyone in between. We have a passion for SciFi and we always seek to spread that passion around!

Writer’s Track – The JordanCon Writers track is a place to come learn about the art, craft, and business of writing. We have topics that range from traditional to self-publishing, editing and other aspects of writing, and workshops

Brandon Sanderson Track – In this track all things Sanderson are discussed.

Workshops – Do you like to learn new skills or how to make items? Visit the JordanCon Workshops Track to unleash your crafty side or your unquenchable thirst for knowledge. Here, participants acquire different skills. Sign-ups are located at registration at the beginning of the convention.

Jordancon is more than just panels; it is also a chance for some hands-on activities. Every year the Workshop staff looks far and wide to come up with amazing workshops for con-goers to attend. The best part about the workshops is that you don’t have to be familiar with The Wheel of Time to enjoy them. It is perfect for those of you that are attending with a fan but haven’t read the books.

Any questions can be sent to workshops Director Amelie Downing at workshops@jordancon.org.

Now that you know a little more about the technical aspects of the schedule, here are your next steps: 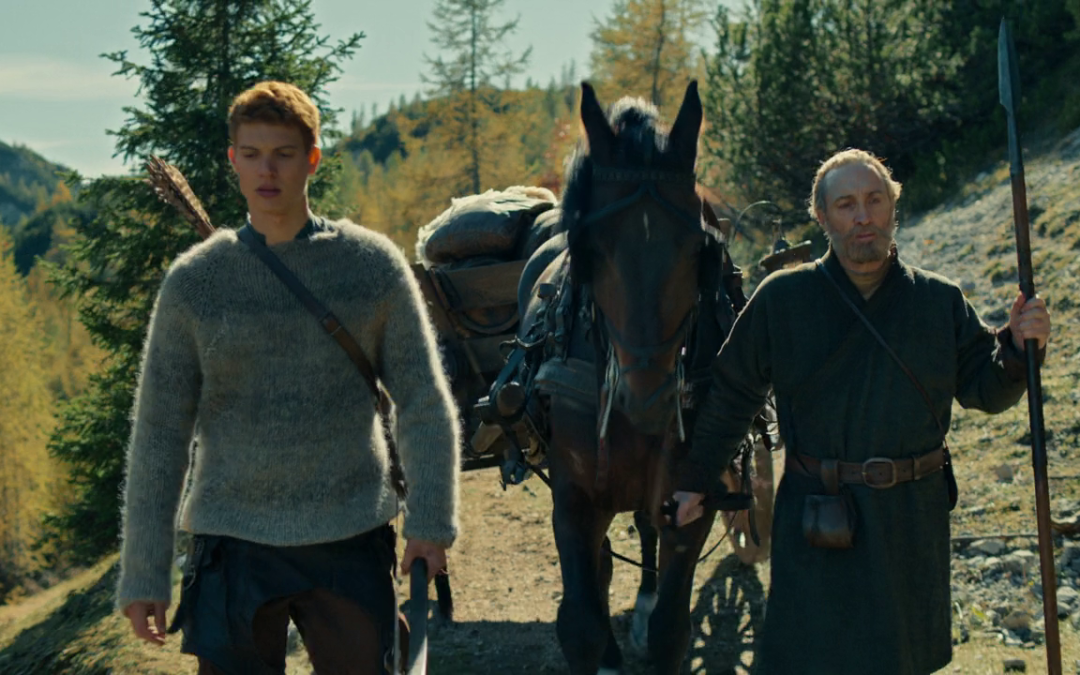 Costuming in the Wheel of Time Television Show: Intro

The Wheel of Time series by Robert Jordan (and finished by Brandon Sanderson) has been a high fantasy staple for years, and in 2017 Amazon Prime announced the start of production on a multi-million dollar, multi-year and multi-country streaming live action adaptation. Amazon seems to have high hopes for the fourteen-book series, reportedly spending an average of $10 million an episode—and from what I have seen it is worth it. 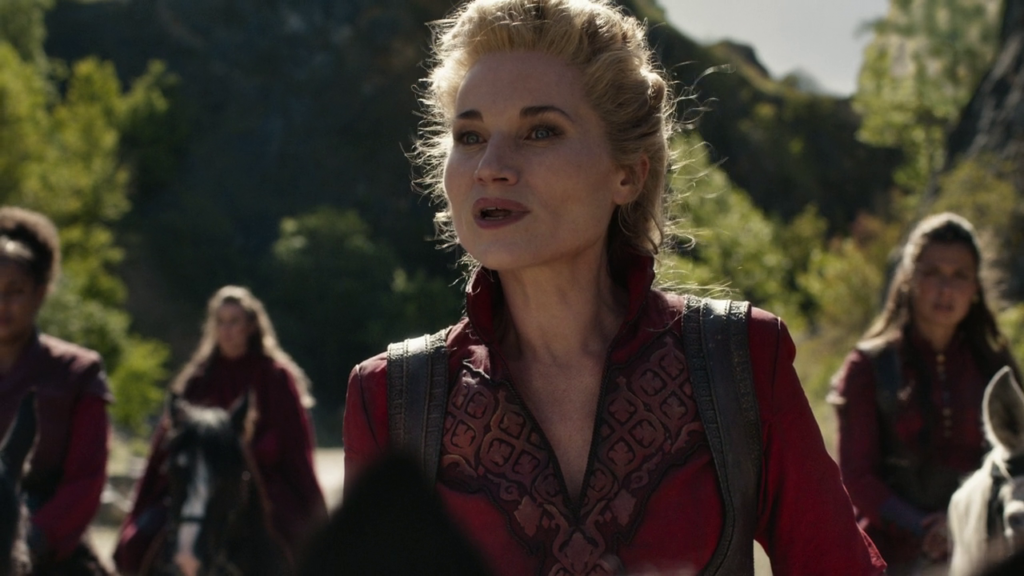 I was given a chance to preview the first three episodes for this article, and while I am not a costume designer for this series, I have worked as a costume instructor for years. This gives me a unique perspective when it comes to theatrical adaptations of the written works, especially from a costuming standpoint, and the costume choices and execution will be the focus of this article.

The series The Wheel of Time is full of descriptive worldbuilding, encompassing fourteen distinct nations (not to mention cultural groups), which all get visited at least once by at least one of the seven main characters. Breaking this down will be an intimidating task. So let’s look at some of the ideas designers think about when turning books into visual media.

Let’s take the first two episodes. The story starts in the backwoods of nowhere, (eventually we will get an interesting contrast between our humble main five and the richer denizens of this world, but later). Who are the characters at their core, and what are they trying to accomplish? In this article we will look at three distinct groups. Our main five characters, just trying to live in a small town, a powerful visitor and a group that wants you to think they are something they are not.

The characters from Emond’s Field (specifically Rand, Mat, Perrin, Egwene and Nyneave) are just living their lives where things like fashion might be YEARS behind other areas of the world. People in Emond’s Field make things from scratch, they will alter them, redye them, re-style them, until the garment falls apart (we see this in our own history with clothing from “the peasant and working class”). Effectively, who cares if it exactly matches something you already own, it took someone three days to make it after working all day on something else.

Garments might be gifts or have more sentimental or utilitarian appeal than wearing clothes. Emond’s Field is known for their wool production, so any garment you see made from wool or that is woven is more valuable outside the town’s home region of Two Rivers. So clothes for new garments in a place like Emond’s Field is harder to come by. This doesn’t mean they are not interesting—as a costumer you can put in little easter eggs like the color of Nynaeve’s (Zoë Robins) coat for example juxtaposed to the color of the inside lining (foreshadowing future important aspects of her character), or Rand’s (Josha Stradowski) coat, the fact that Perrin (Marcus Rutherford) is the only one actually wearing fur (also foreshadowing) but that is for another article. 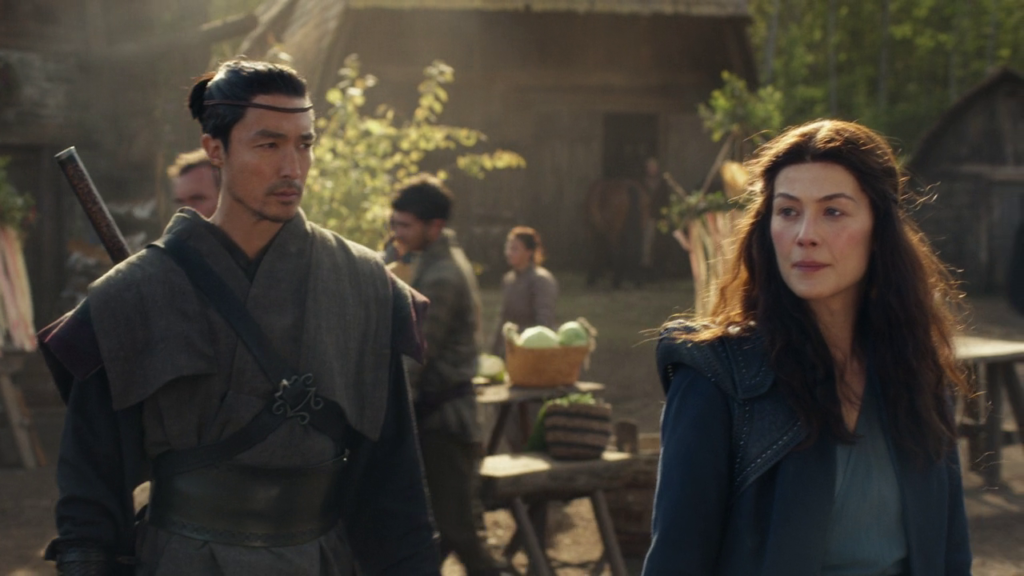 On the opposite side of the spectrum we have Moiraine (Rosamund Pike) who is trying not to make a stir when she first appears in Emond’s Field. Not only does everyone know everyone in a town this small but she visually doesn’t fit, even her protector Lan (Daniel Henney) doesn’t (though he fits better). First, she is openly wearing pants, and the fabric doesn’t have any kind of pattern, even the fact that her garments don’t tie or button make her stand out. Her clothes might be made of wool but the clothes themselves are much finer than the townspeople. Her overall silhouette is tall, narrow and streamlined. From a costumer’s perspective, Moiraine needs to be utilitarian — she is traveling a long way through inhospitable terrain, trying not to draw attention to herself but she was raised in comfort (to say the least). From what I’ve seen, she’s sticking out like a sore thumb. Her colors are too rich, her clothes fit well, her silhouette is too sophisticated, someone born to nobility in a city they’ve never seen.

An interesting example of costume theory is the look of The Children of Light, which plays a much more subtle and psychological game than with 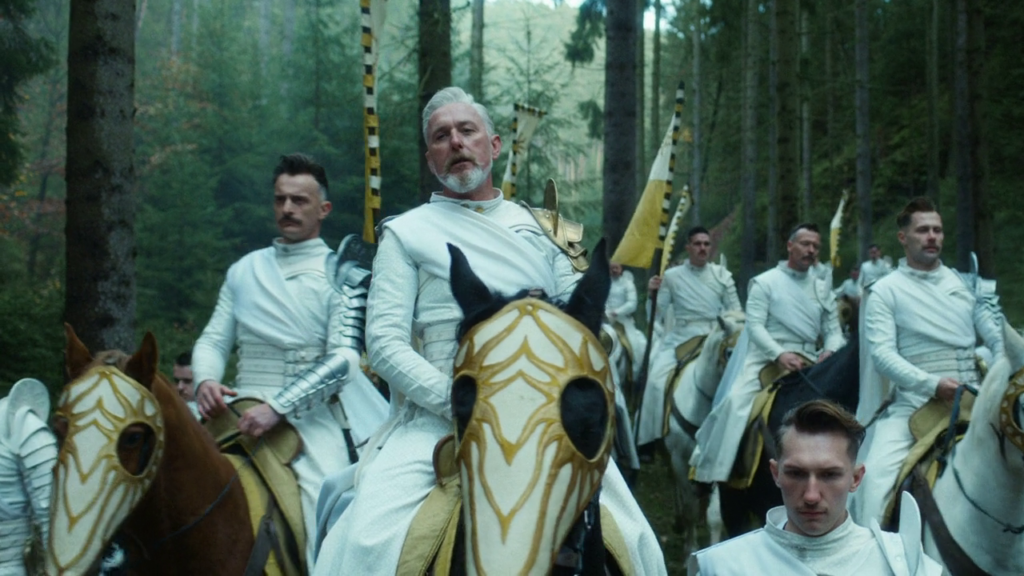 Moiraine. Commonly referred to as the White Cloaks, these are the group dressed completely in white. I think the costume designers are showing the White Cloaks as THEY WISH to be seen, not how the world actually sees them. They are religious zealots first and foremost, and they need to be warriors out of necessity because they see The Shadow is everywhere. But, they don’t have armor. No one would attack them, and they believe, so deeply, that the Light will protect them, that they don’t need it. They want to give off an authoritative air, but not a threatening one. If they scare the people they are “protecting,” it will make their job harder. This non-threatening appearance is in stark contrast with their actions when we, the audience, are introduced to them, which are brutal and reprehensible.

While I know that this isn’t how they are described in the book, it should end up being more nuanced and more realistic than a heavily armed group of soldiers stomping around the woods for no reason. This way the designer is letting the actions speak and leaning in on the jarring contrast.

This article only covered costumes, but I hope it gives you some sense of the wheels turning behind the scenes. While there are fans of the books who have loved them for years, who may be hesitant that the story will be done well, we will need more new fans to love them if we are going to see the Last Battle come to life. On that front, I can tell you that those who cherished the books will love this adaptation, if they go in with an open mind and remember that no one can make everyone happy all the time. Those who have never read the books should be able to follow with no trouble. For those who like to binge watch and rewatch, there is more to discover with each viewing. I was driving after watching the first three episodes and found myself slapping the steering wheel yelling “Blood and bloody ashes, how did I miss that! That was amazing!” Overall, I’m very excited for the direction that this show is taking, and look forward to breaking down even more costume theory as the show progresses through the story!

Aleron Kong Dr. Aleron Kong , author of the internationally best-selling series The Land, which has sold over 1,000,000 worldwide, and was voted Audible’s Customer Favorite. Aleron is also on the Amazon top 100 Authors list. With help from his readers, Aleron...

JordanCon will take place April 22-24, 2022 in Atlanta, Georgia. The Guests of Honor are Faith Hunter as the Author Guest of Honor, and Annie and Justin Gerard as the Artist Guests of Honor.

We are a 501c4 tax-exempt organization.