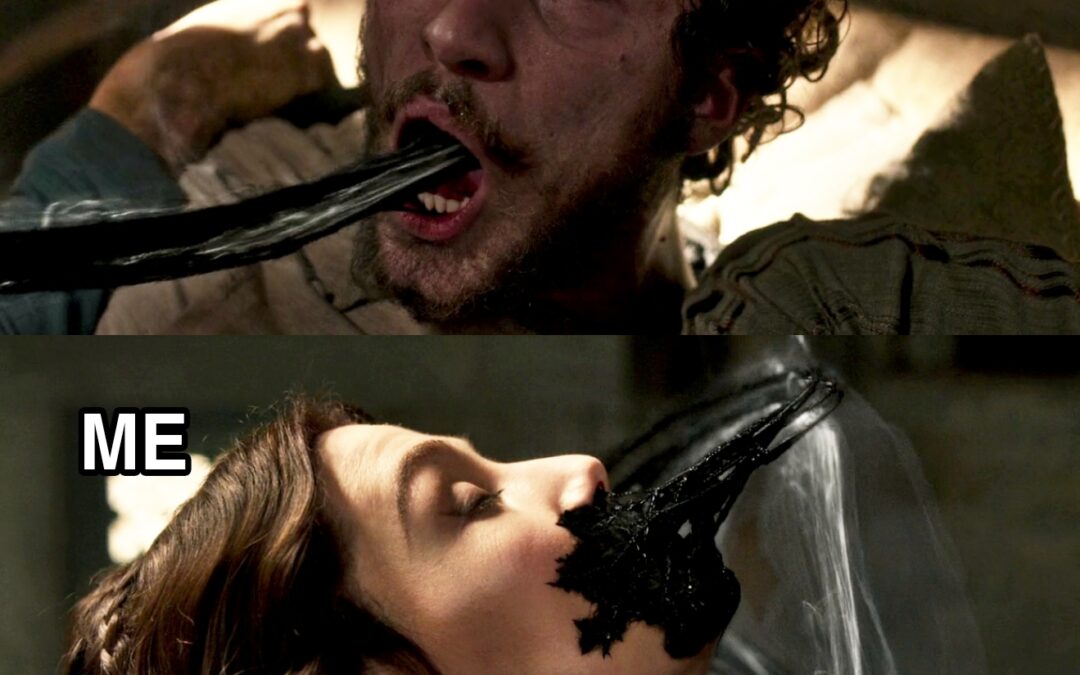 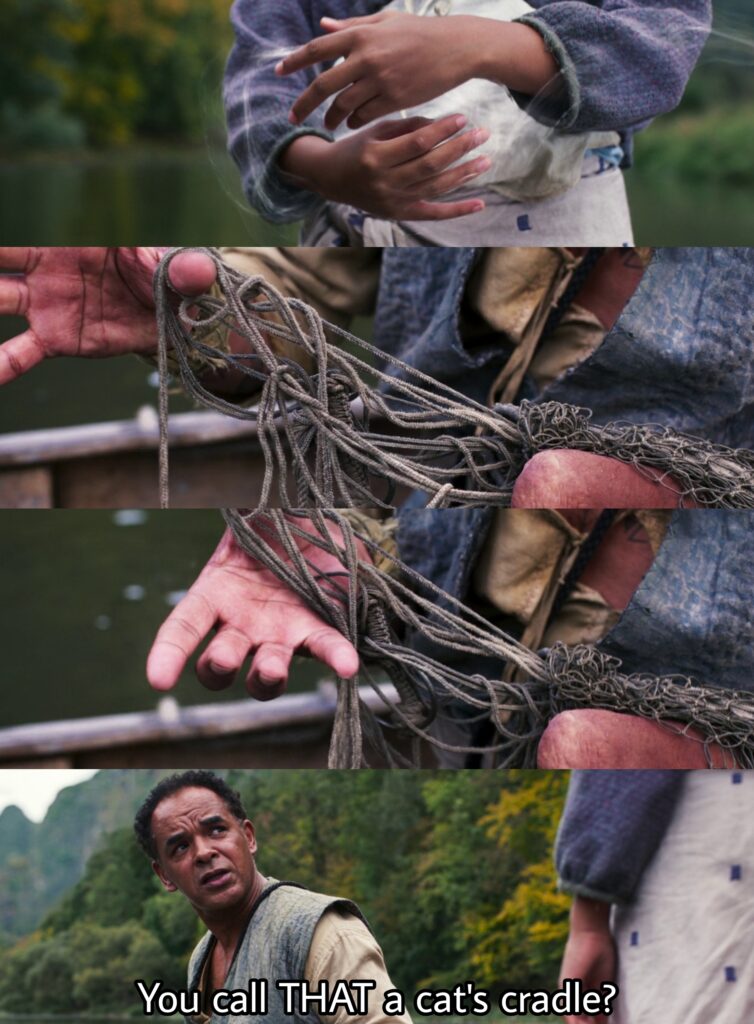 Episode 6, titled “The Flame of Tar Valon,” begins with a young Siuan Sanche and her Father on a boat. (Don’t you ever forget!) He’s struggling with a knot and she channels to help him out. He chides her because they live in Tear where channelers, even women practitioners, are not liked. Well, his wariness was not unfounded as neighbors must have seen Siuan channel at some point. They arrive to their dock as their home burns to the ground. Knowing it is no longer safe for Siuan, Papa Sanche sends her off alone to the White Tower.

Fast forward to the show’s present where we meet the head of the Aes Sedai, the Amyrlin Seat. 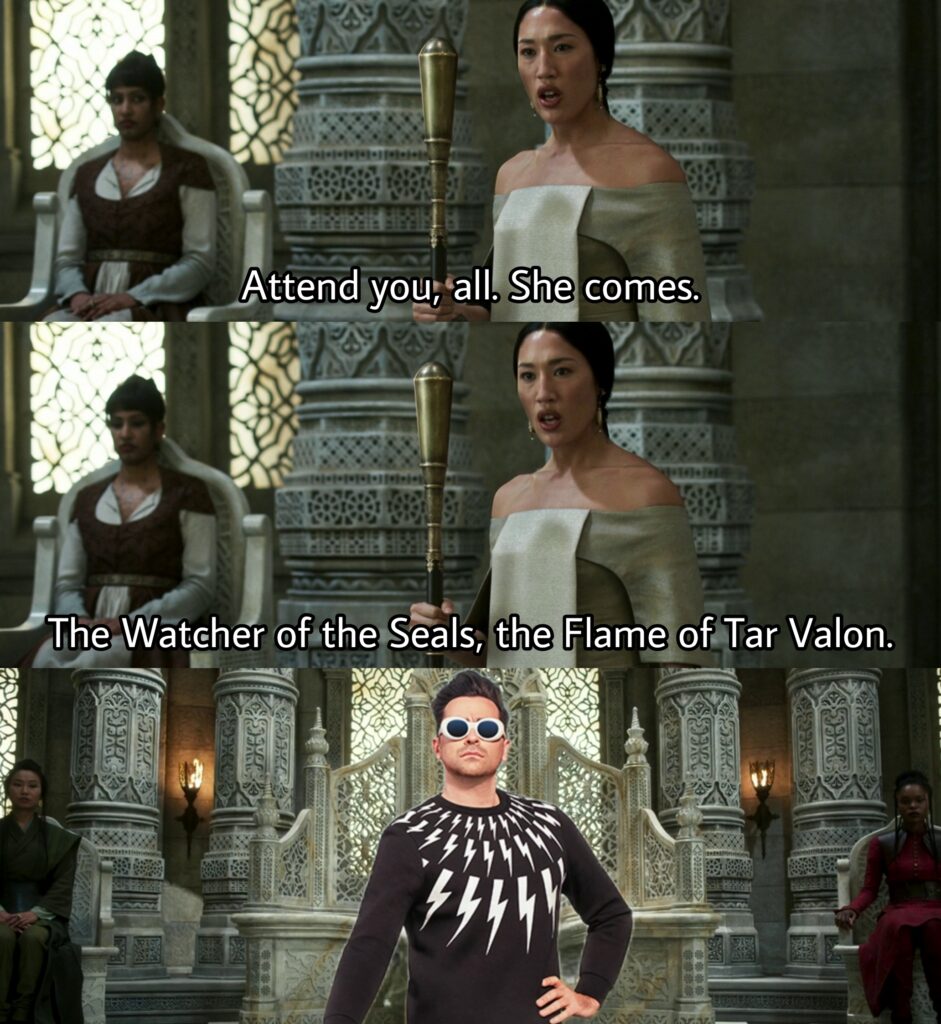 Once seated, Siuan calls for the false Dragon to be brought before her. Logain, unfortunately, does not live by the old adage, “if you don’t have anything nice to say, don’t say anything at all.” 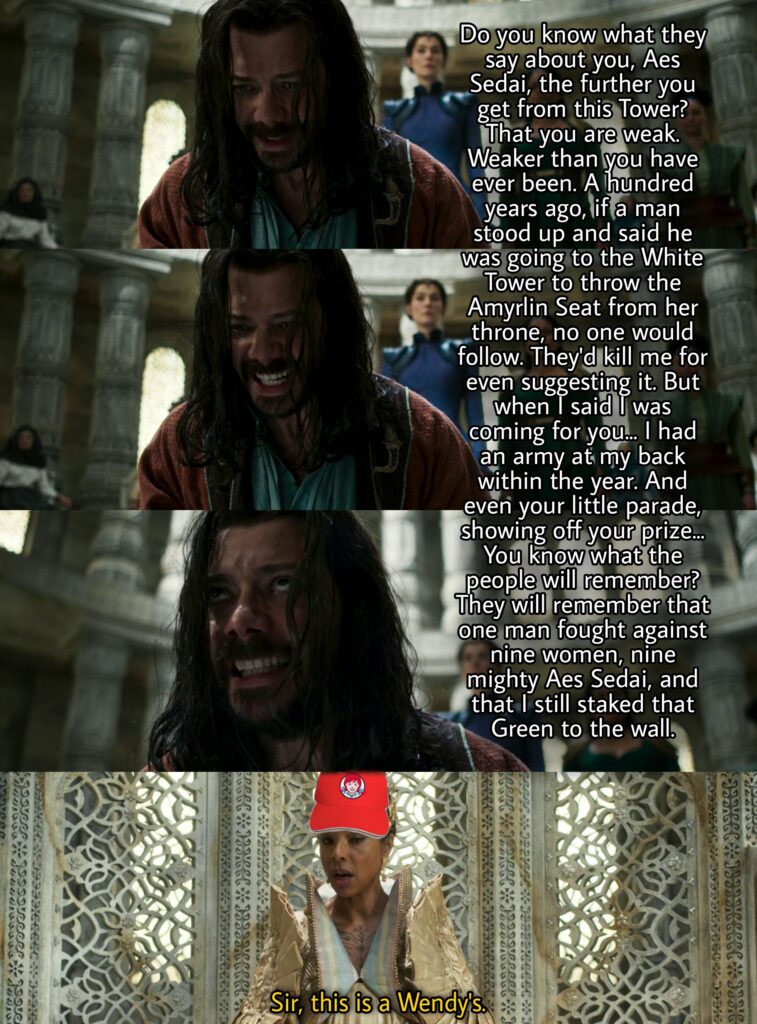 Once Logain is taken away, the Amyrlin turns her attention the the sisters who gentled him. She shows no patience for their circumstances and announces penance for Liandrin who was in charge when it happened.  But Liandrin is not one to lie down without shouting, “SHE STARTED IT!” 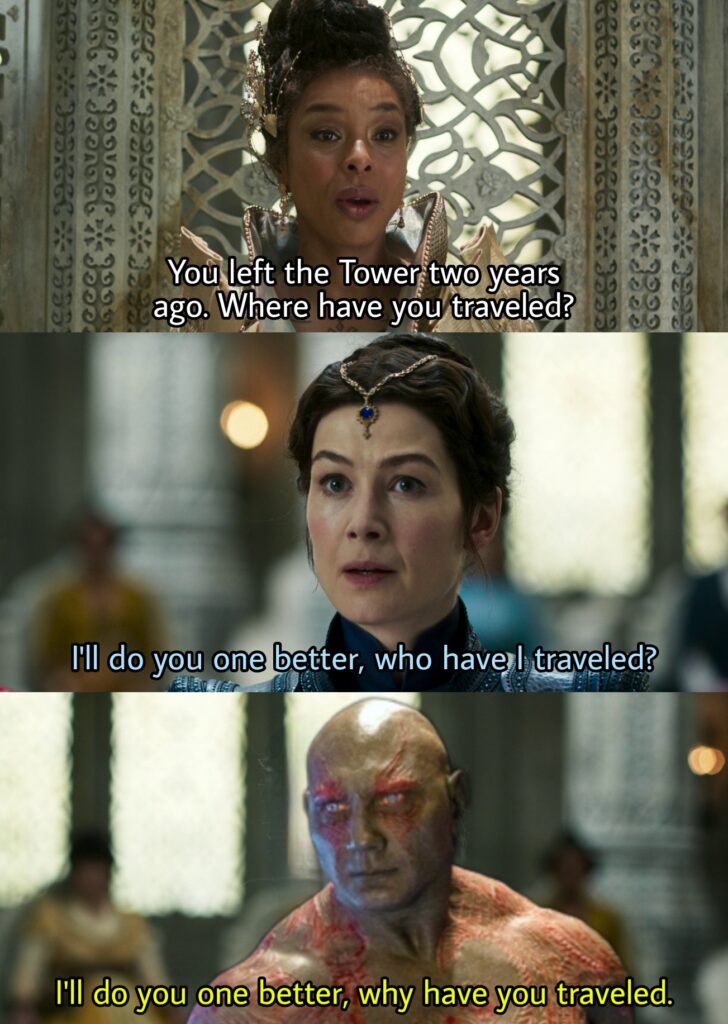 Siuan was having none of their bull and retired to think on penance for them both.

Elsewhere Moiraine’s eyes and ears did their job, and she finally found Rand and Mat. 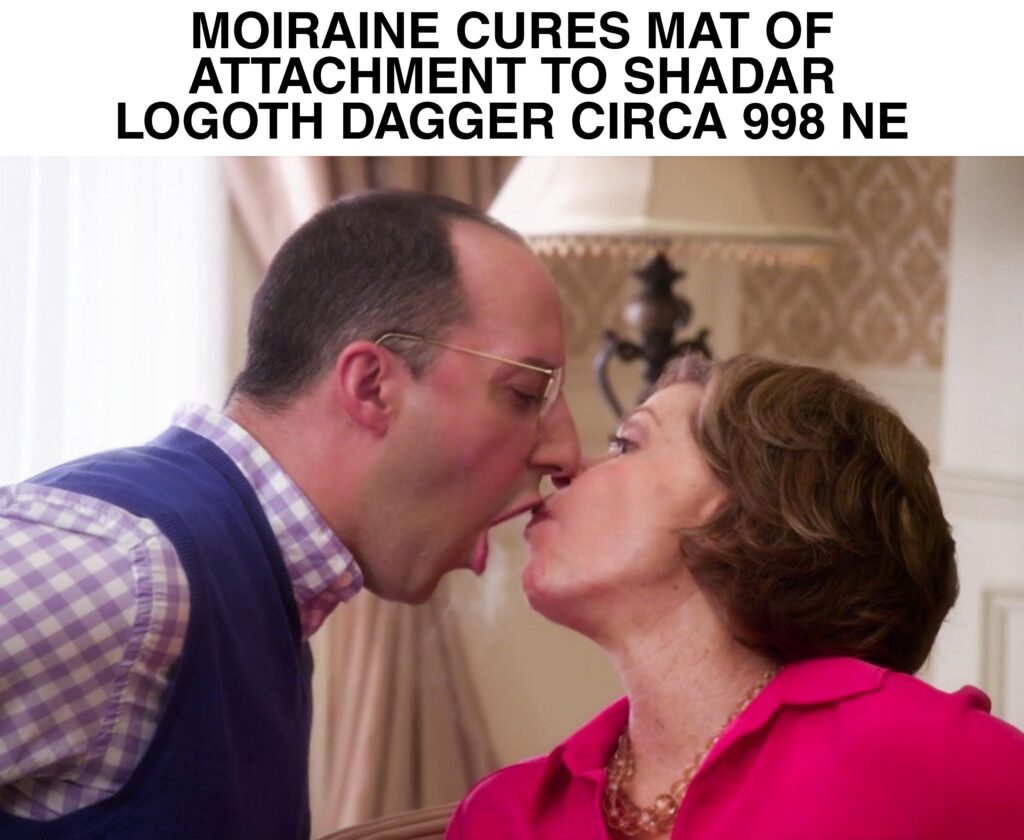 Oh, and Rand continues to look like a certain Jedi. 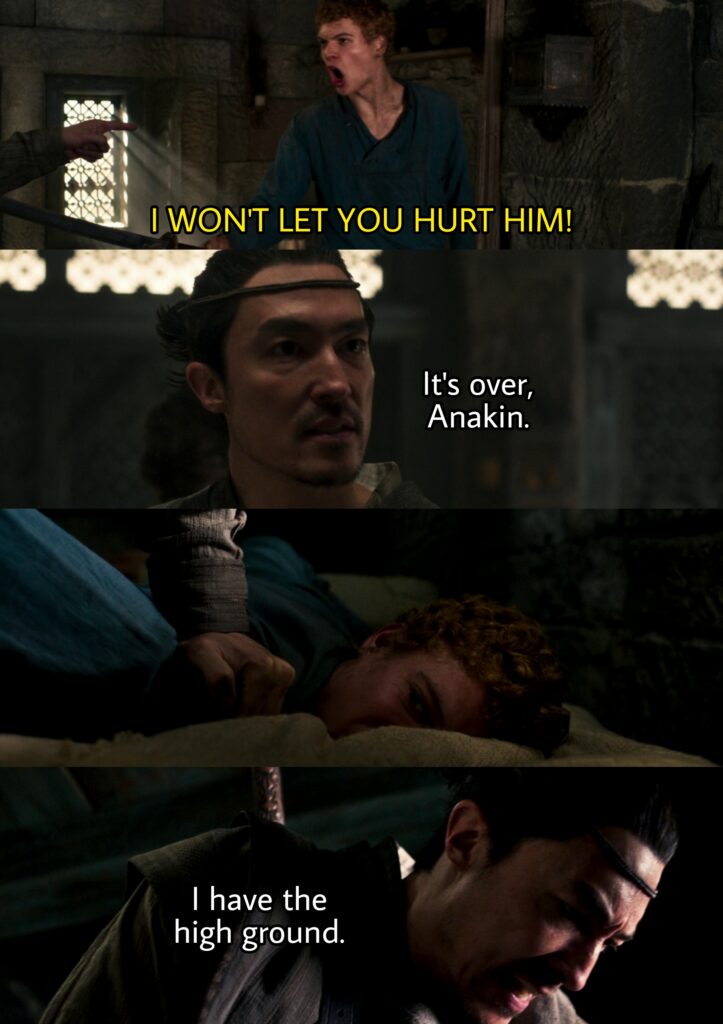 Moiraine’s eyes and ears also lead her to Perrin and Egwene. Egwene is much happier to see Moiraine than Rand was and she eagerly tells the blue of their plight. She ends her story by letting Moiraine know she took something very special from Valda. 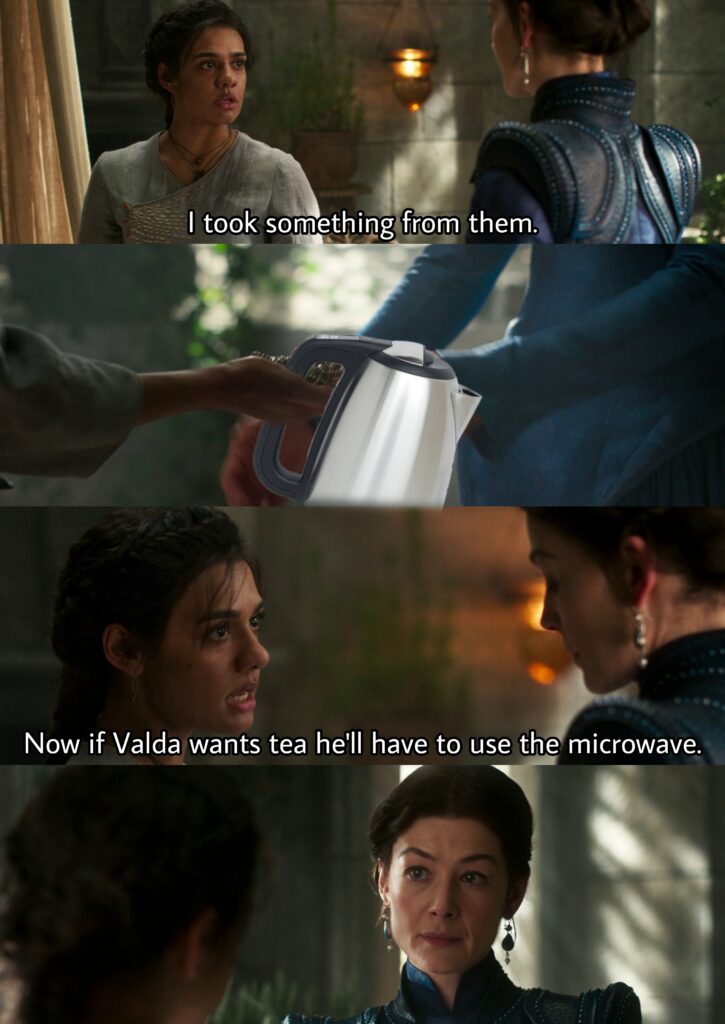 That night, Moiraine and Siuan meet via the use of a Ter’angreal. The tension between them is completely gone, and they’re even revealed to be very… close. They have both been looking for the Dragon Reborn for twenty years and with Moiraine being so close to the end of her journey, they’ll have to keep up their fake rivalry.

The next day, before Siuan can sentence Moiraine, our favorite Blue has a run in with our least favorite Red (So far). 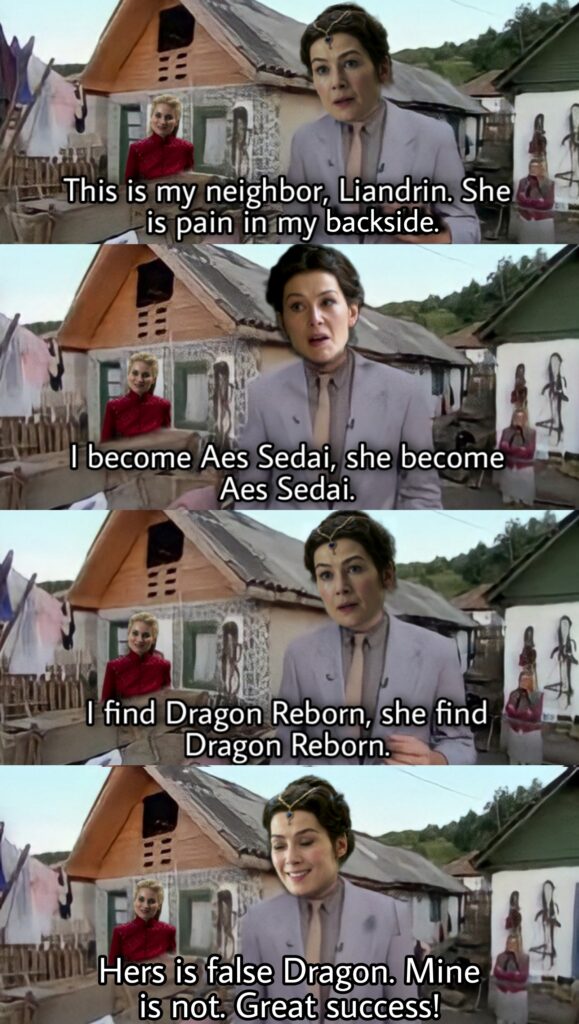 WIth Liandrin out of camera shot, Moiraine continues to prepare for “The Plan.” Step one: recruit help from one of the Builders. 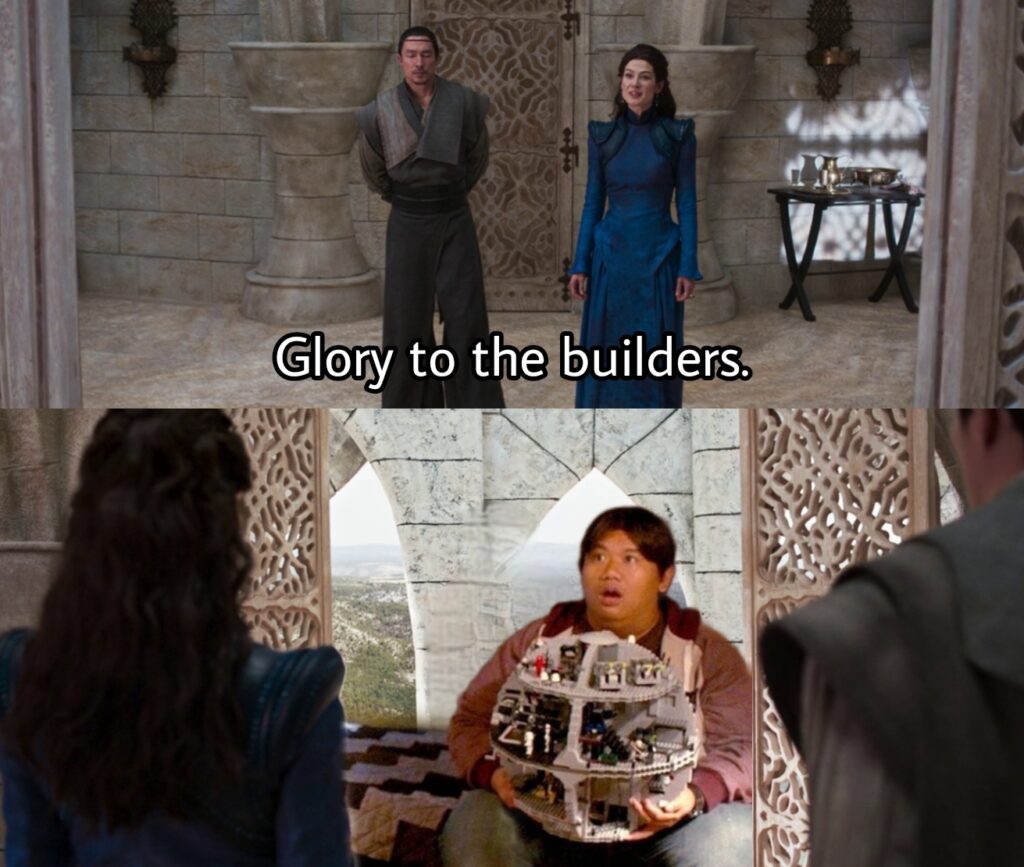 And then it was time for Moiraine’s penance. Siuan was not kidding when she said they would have to keep up their ruse, she even pulled out the Oath Rod to help sell it. 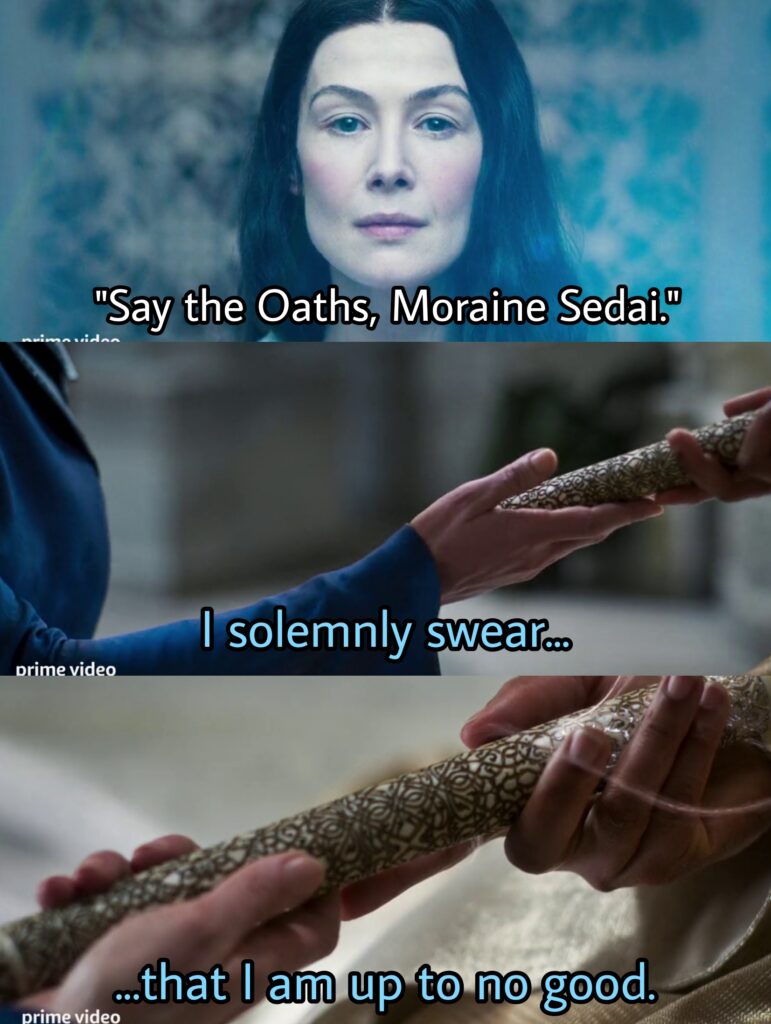 Now exiled from Tar Valon, Moiraine is free to do what she needs. She meets up with the Emond’s Field Five and Loial at a Way Gate and explains to them that they may not all survive. They follow her anyway. Well, most of them do. The Episode closes as the Way Gate does so, as well, behind our cast with one notable exception. 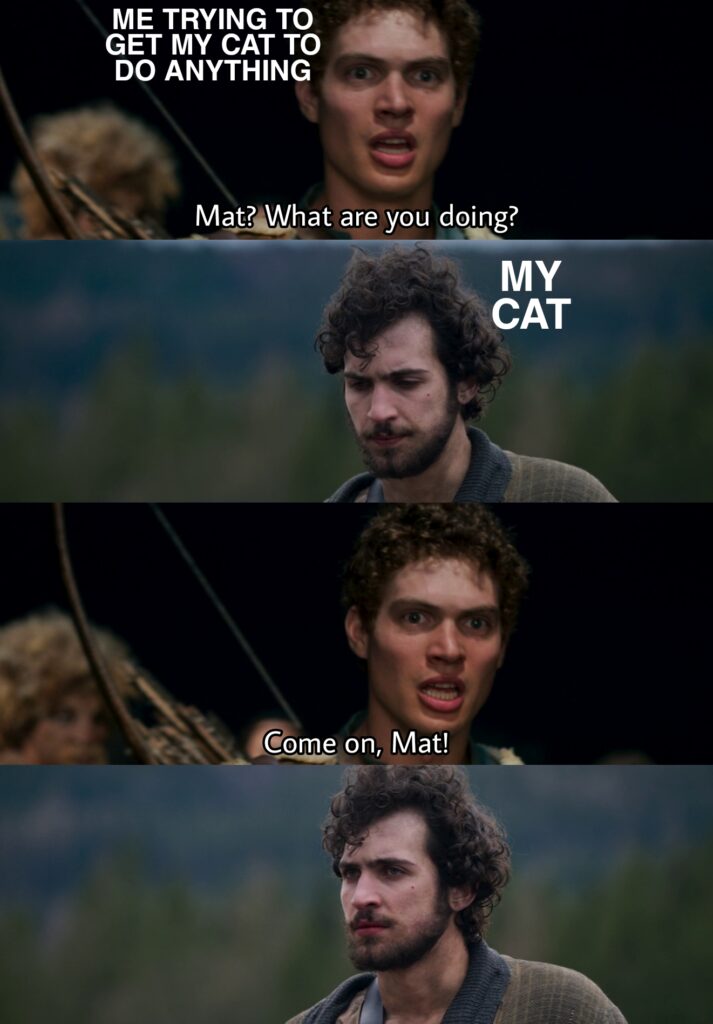 The episodes keep getting better and better! Episode 6 brought in a lot of the Aes Sedai politics from the later books and made it very compelling. A large chunk of the episode was just sisters talking in the sitting room with not much movement, but I was on the edge my seat for every word spoken. But it wasn’t all Aes Sedai debates, as the rest of our cast is back together and heading through the Ways! Well, most of them. It’s a shame Barney couldn’t continue past this point. He was excellent as Mat all season long! But I hope he is doing okay and wish him well.

It’s hard to do a comparison for what was and wasn’t in the books for this episode as both all of it and none of it was in the books. Individual interactions from the books were tweaked and put in different locations. All of the characters are going in the same direction as they were in the books, their paths are just slight different. Moiraine’s exile was definitely new and the use of the Oath Rod was surprising, but that does come up later. Now we have precedent that it can be used for more than just the three Oaths. Plus, Moiraine can’t be called back so easily by Maigan or any of the other Blue Sitters. Even Moiraine and Siuan’s relationship felt like something pulled out of New Spring and brought forward. Despite the new context, everything is recongizable and just feels right. Loial continues to be perfect, and the very small bit of the Ways we got gave me chills. The next episode cannot get here fast enough!

Now it’s time for your free meme template! This one comes from the current episode, and it involves Egwene and Nynaeve.

Now let’s see what you’ve got! What caused Egwene to glare at Nynaeve?

Until next week, remember: the Wheel memes as the Wheel wills. 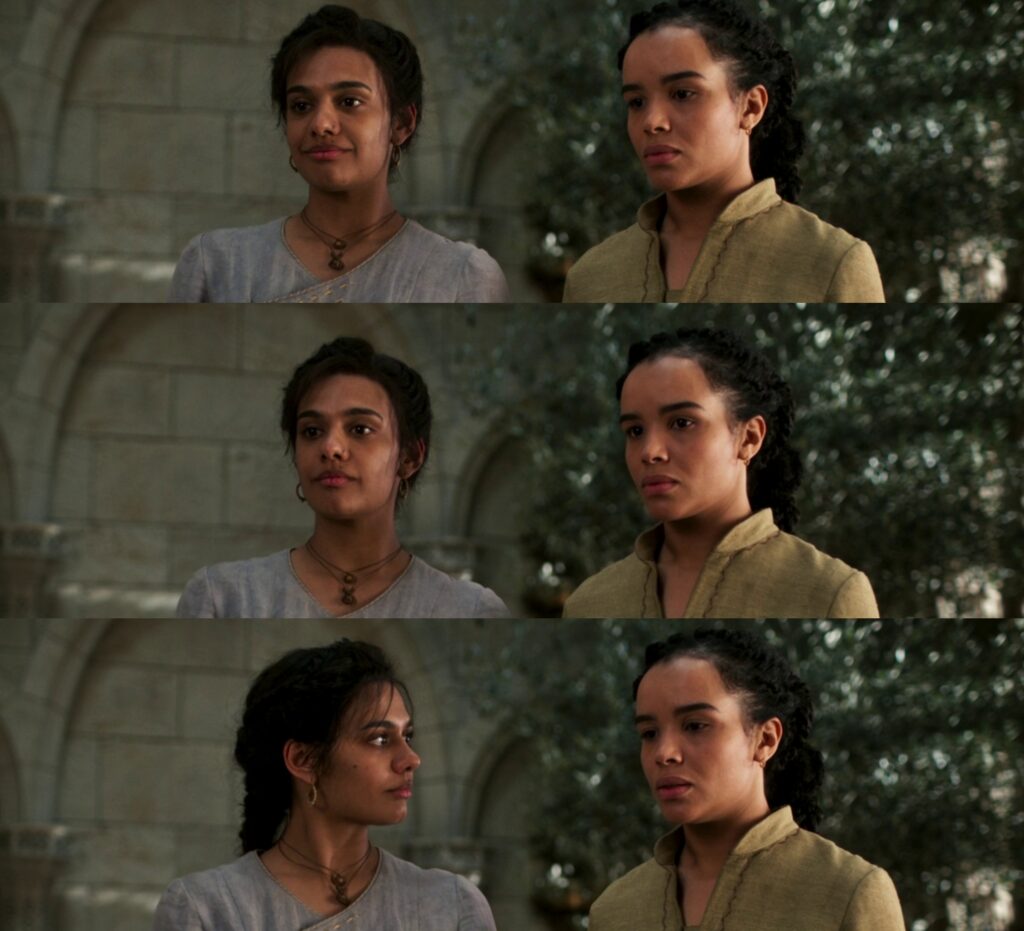