Considering the Study of Many Dragons: Two Book Reviews & a Cake 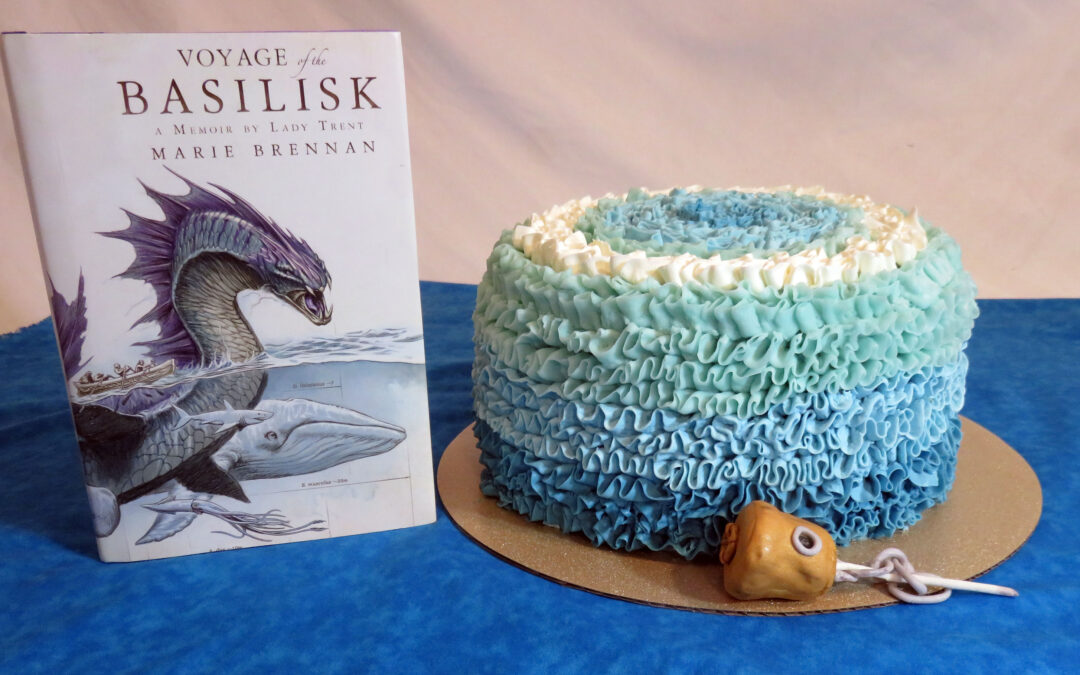 The Tropics of Serpents: A Memoir by Lady Trent written by Marie Brennan

Join me in discussing Lady Trent and her extended study of dragons. As we draw closer to JordanCon time is starting to run short. There is still time to read a few more books before the convention. Each is around 12 hours of audio listening. By now I hope people have checked out Marie Brennan’s website to learn more about her. There is also a good collection of articles about and by Brennan on Tor.com, including her take on RPG campaigns.

JordanCon family, life hit. I fully intended to have two different articles about these books. Then I fell and injured my hand with less than 3 weeks to the con. Typing is slow going; however, I still want to provide everyone with more about our author guest of honor’s work. Toward that end, this article will cover a summary of book two and three from the Trent Memoirs. It will also showcase a fanart cake I made in appreciation of the sea serpents in book three. Thankfully the cake was made a week before life went sideways.

Discussing the books this way will include spoilers, but as in my first article, major book spoilers will be below warning lines.

In The Tropics of Serpents, the now widowed Isabella Camherst embarks on an expedition to the continent of Eriga to study savannah dragons and many other species. On this trip, Isabella takes the steps that will lead her truly down the road as Scirland’s premier dragon naturalist. The elder Lady Trent also warns readers in the preface that scandals and gossip abound for this portion of her life.

Joining her on the adventure this time is Mr. Thomas Wilker, assistant to the Earl of Hillford, and Miss Natalie Oscott, the earl’s granddaughter. Lord Hillford is around for moral and financial support, but his health does not enable him to travel. Along the way, the group meets Erigans such as: Faj Rawango, Galinke, Okweme, Akinimanbi, and Yeyuama. The Erigan’s are from different backgrounds. They do not share a religion, a culture, or skin tones with the Scirling characters, nor with each other quite often. Readers will see the implied and, at times, overt racism of this world.

Eriga is a tropical land that invokes images of African savannahs and rainforests with a vastly different power structure than found during Earth’s Victorian history. It is also filled with iron ore deposits in a world hungry for iron. The cultures represented by the various Erigan characters appear to be a blending of African cultures. I appreciate this blending, so that nothing feels like a parody. Instead it feels like Brennan is trying to show the cultures as real and fully developed, though the reader is not immersed in the nuances.

The main focus of the narrative is about the study of dragons—from the savannah snakes of Bayembe, to the Moulish swamp-wyrms inside the Green Hell—and what Isabella is willing to endure in pursuit of these studies. Even when others want her to stop.

Map of Eriga by Rhys Davies. Swamp-wyrm by Todd Lockwood.

Spoilers: The Tropics of Serpents

The real strength of The Tropic of Serpents is in the character development. In book one, Thomas Wilker is introduced as Lord Hillford’s assistant. A minor criticism I had was he never became a 3D character in my mind. Brennan completely changes that in this installment. She wrote about this transformation inside her mind on a blog post several years ago. In this book Wilker and Isabella develop a strong working relationship, and more importantly a true friendship. A friendship that is beautifully free of any sexual tension between the two characters, though outsiders kept trying to see some and cause troublesome rumors to boot. I greatly appreciated how a ceremony to banish witchcraft allowed for frank conversations between all the main characters.

Natalie Oscott transforms from a one scene character into Isabella’s true companion. She is an engineer at heart and her designs help drive the action. Oscott, like Isabella, wants a life different from the expectations of a  Scirling noble woman. Unlike Isabella, her father is not supportive of these goals. Thankfully, her grandfather and friends do support her actions.

Brennan digs into the realities of being a “lady adventurer” more in this book. From dealing with unwanted advances to dealing with menses in different cultures. Not offending local norms plays a major role in how the subjects are handled. Being a young widow and mother does not free Isabella from marriage expectations, despite what she might wish. For those hoping to see different sexual preferences expressed, the topic is touched upon lightly and more favorably than typical Victorian era novels.

The conclusion of the novel takes a hard turn away from the study of dragons after Isabella performs a near miraculous feat with the help of Oscott’s engineering skills. She earns the right to learn more about the swamp-wyrms, just in time to defeat an army with them. Readers are teased with more Draconean ruins and rumors of treason. It’s almost unfair how fast paced book 2 is in the last few chapters. Yet it leaves Isabella and Wilker with strong lessons learned about the dangers of making promises rashly. These lessons serve them well in the next installment of the series.

The Voyage of the Basilisk: A Memoir by Lady Trent written by Marie Brennan 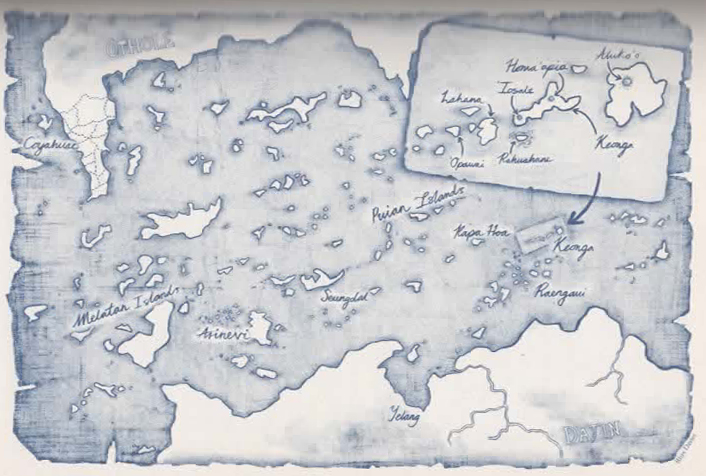 The Broken Sea by Rhys Davies.

If you decide to pick up physical copies of these books, I highly recommend the hardback versions. Not only is each book printed with beautiful interior artwork; each book is printed in a different color scheme too. Book three, to match Todd Lockwood’s impressive cover illustration, is printed in blue. Most appropriate for a story that takes place largely at sea and on islands.

Readers join Lady Trent six years after her Eriga trip as she, her son Jake, and Tom Wilker embark on a voyage around the world in search of sea-snakes and more dragons. She and Tom are gathering information to question the nature of dragon classification. If successful, both might achieve the recognition from the Philosophers’ Colloquium they crave, despite the barriers of gender and class that have blocked their paths.

The Voyage is my favorite installment of the first three books.  It might be due to the Keonga islands, inspired by the Polynesians islands and people. It could be the introduction of the archaeologist character named Suhail from Akhia. It could also be the sheer scope of the adventure told. It’s a literal voyage around the world, which takes them on a two year adventure visiting many parts of the world barely mentioned until this point.

Beyond the study of dragons, readers learn more about the ancient Draconian civilization that has popped up in the other books. Now more links are being drawn between them and the study of modern dragons and sea serpents.

Isabella and Thom continue their research as they deal with hostile governments, cultural taboos, tropical diseases, storms, and being shipwrecked. 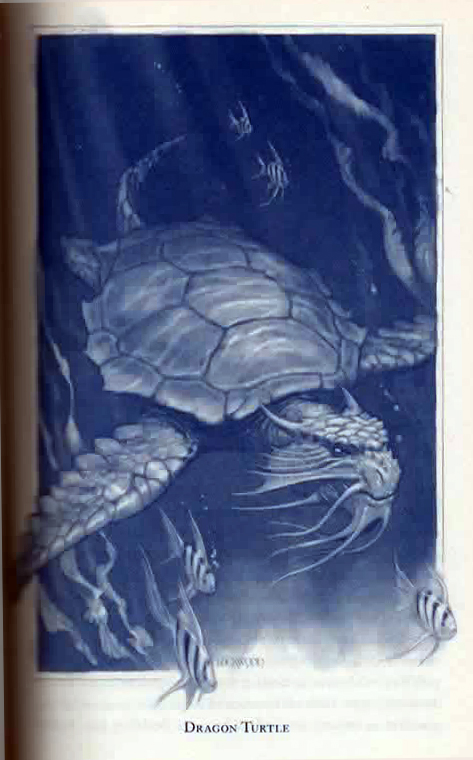 Spoilers: The Voyage of the Basilisk

One of the best additions to the stories is Jake Camherst, Isabella’s now 9 year-old son.  He and his governess Abigail Carew join the expedition as a learning opportunity and as a counter to all those that criticized Isabella for leaving him behind when she went to Eriga. Sadly, Abigail remains a rather flat character, but Jake grows in many ways during the story. He also pushes his mother into some adventures she would have turned down without his prodding.

The other stand out addition to the story is Suhail, an archaeologist of Draconean ruins met by accident twice during the journey. His desire to learn more about the Draconeans makes Isabella more interested in them as well.  Brennan has said her natural inclinations are better reflected by Suhail, rather than Isabella. He is a character with drive and interest. He also has an ability with languages that enables better communication between the Scirlings and an assortment of other peoples. Like Jake, Suhail also prods Isabella into taking actions. Actions that lead her into the middle of another battle.

The Keongan people are primarily represented by Heali’i. Who is a Ke’anaka’i and identifies Isabella as one too. These ‘Dragon Spirited’ people are recognized and respected in the culture as different. Yet not being of a related culture or transgender myself, I would hesitate to call it a positive representation. I respect Brennan for including a transgender character in a culture that creates a place for them. She could have not included the subject, but instead it becomes a plot point. This enabled more frank conversions as thought provoking as the witchcraft ceremony of book two. The Keongan people respect the Ke’anaka’i. Isabella respects them by fully acting as one. Indeed, being one opens up several opportunities otherwise forbidden to women.

The pacing is a bit uneven and will seem slow if you only want action and fighting dragons. This segment is more about the people and animal breeds met along the way.  It includes more self-reflections than in past books. Yet despite these minor issues, this installment inspired me the most.

More adventures await for Isabella Camherst. Indeed, as of book three, she is still not Lady Trent. That story happens later in the series. Yet I hope these discussions have inspired you to pick up the series and enjoy the full story yourself.

Words of the Series:

Interlocutor – a person who takes part in a dialogue or conversation.

Much like Brandon Sanderson used “maladroitly” quite often in his Mistborn: Era 1 series, Lady Trent uses interlocutor several times per book. It stood out after the third time I heard the word, and I was finally compelled to look up the meaning.

Let us all gather in July to be interlocutors together.  Until then, enjoy some tea and cake while reading more from Marie Brennan.

The sea serpents and Todd Lockwood’s stunning cover artwork fired my creativity after reading the series. Thanks to this inspiration, I decided to make fan art. My medium of expression has become cake and fondant in the last few years. At the bottom of the waves is an early style diving bell.  I’m rather proud of the engineering that went into creating a twelve-inch tall leaping sea serpent over tropical waves.

Isabella may enjoy a number of coconuts while in the Broken Sea; however, it is not a flavor I enjoy. So the cake is a lemon sponge with pineapple filling, which creates a sunny look and a light citrus flavor. The ocean waves are made with Swiss meringue buttercream in 4 colors. The sea-serpent and diving bell are fondant over rice-cereal treat. Isabella is made of all fondant. 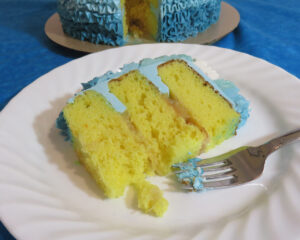 Bright lemon and pineapple flavors. Next images will contain spoilers. 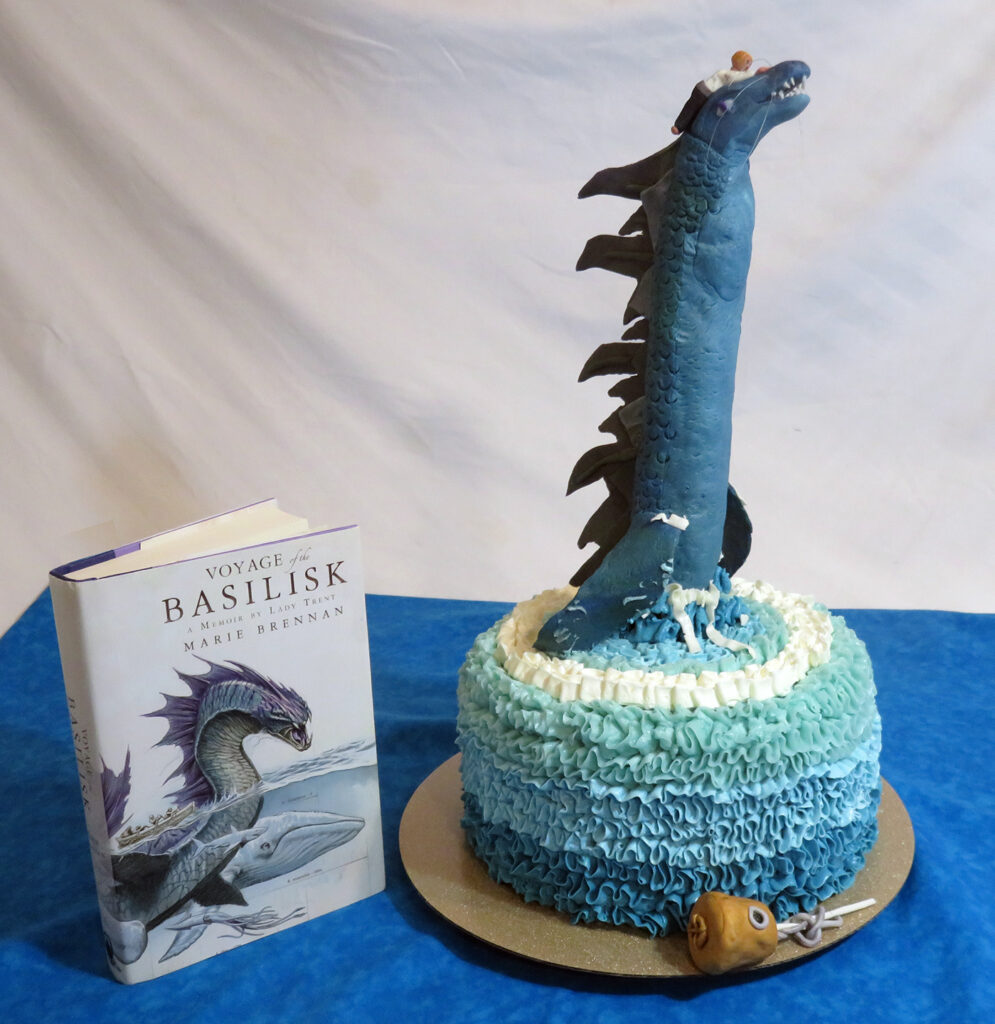 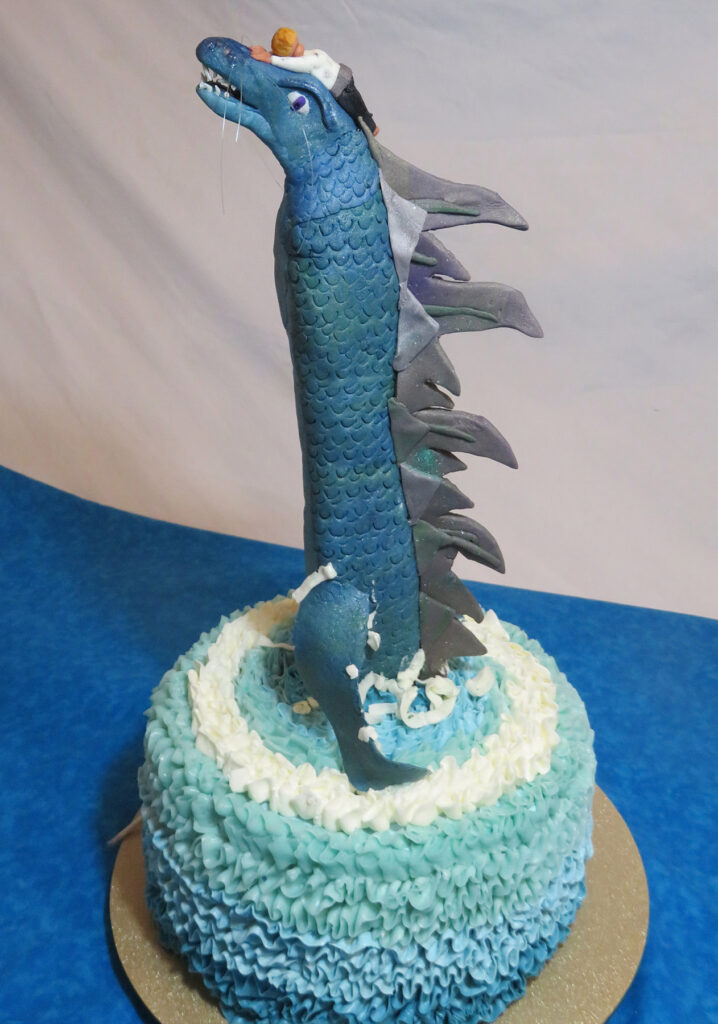 Reverse side of the sea-serpent. I tried to make is square-ish, like Lockwood’s cover. 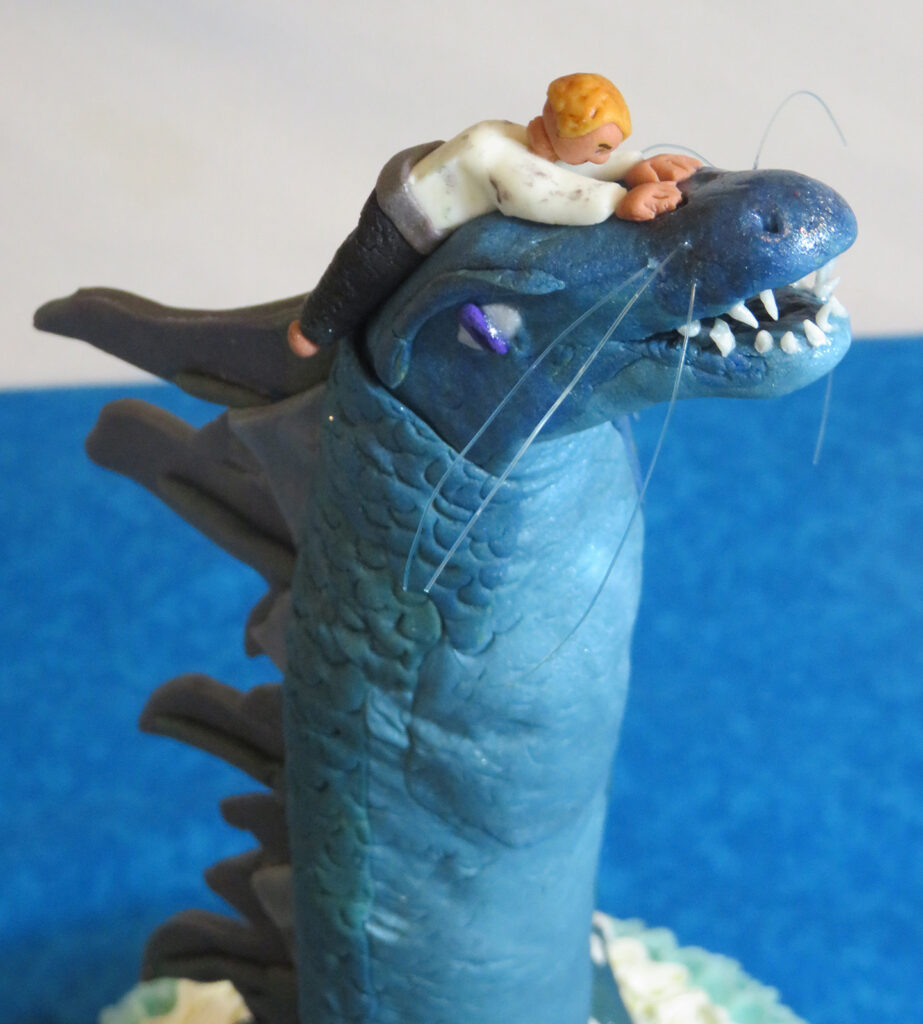 Isabella riding a sea-serpent. Whiskers made of fishing line.

Article and cake by Deana Whitney
Join her in the Workshop Track at JordanCon.