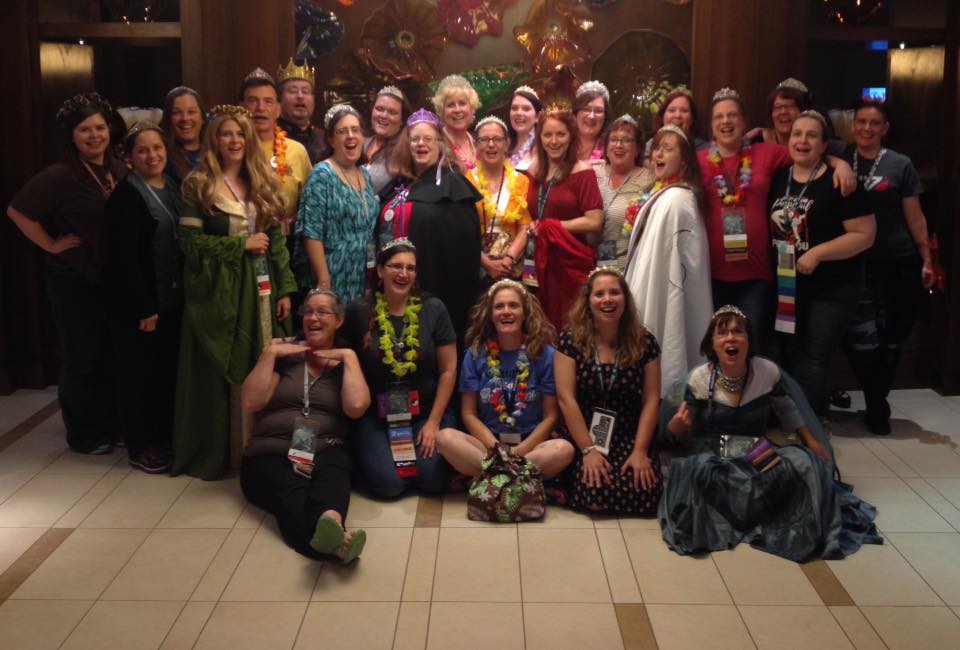 Shenanigans is a word you will often hear associated with JordanCon. Shenanigans come in all shapes and forms: from tiaras to reenactments of famous paintings, to CouchCon. Today we are talking about tiaras and kilts.

Something you will surely notice is a number of people sporting tiaras of various shapes and sizes. Tiaras have become a bit of a tradition at JordanCon. Now I am sure you are asking yourself, “How did that happen?” Well after a little research, I discovered this tradition started with our very own con chair extraordinaire, Jennifer Liang.

JordanCon 5 hosted DeepSouthCon. Jenn wanted to run for president of the Southern Fandom. Her husband (and co-chair), Jimmy, was skeptical of Jenn’s determination when it came to this endeavor. As a result of his doubt, he foolishly promised her a tiara and sash if she won. Of course, Jenn won and Jimmy did, indeed, keep his promise. But how did this one tiara grow into a JordanCon tradition?

In 2017 Lisa Waldron Sommerfield talked about her talk show, Loose Poodle, where they do a segment called “Tiara Time.” Basically she and her friends wear tiaras and make drink recipes (which is right up JordanCon’s alley).  She suggested, via the JordanCon Facebook group, that people wear tiaras and do shots of Tequila. This idea evolved into people wearing their tiaras on the Friday of the Con for a photo op, and “Tiara Time” at JordanCon was officially born. Tiara Time on Friday then grew into “Tiara Time, All the Time” for many con-goers. We still do the photo on Friday. Tequila is optional.

While all this was going on, there was a contingent of the con that could be found occasionally wearing kilts because, as Ross Newberry so eloquently put it, “Breezy.”  About three years ago there was an informal discussion and the undue influence of the movie Mean Girls, and it was decided that “On Friday we wear kilts.”

Any JordanConer, first-timer or veteran, is welcome to participate in Tiara Time and/or the wearing of kilts. In fact, it is encouraged. But don’t worry. If Tiaras and/or Kilts aren’t your thing, there are many more shenanigans waiting for you at JordanCon.