Why You Should Come to JordanCon 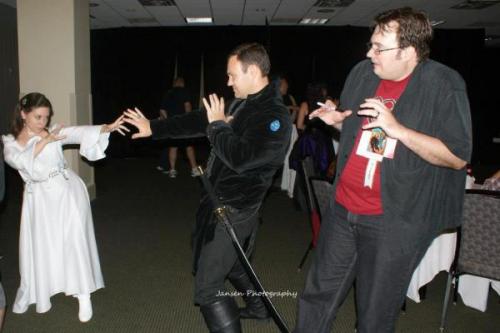 It’s that time of year again!

Okay… you got me… it’s not quite April yet, but it’s that time when we start shamelessly promoting our shiny weekend that is JordanCon, in the hopes of sharing our communal merriment with Wheel of Time friends far and wide—those we’ve met and those we hope to meet.

Seriously, yo. Come and play. It’s a sweet time, and one you won’t regret. The more we get together the merrier, faster, stronger, and the partier we’ll be.

In the interests of discovering what makes JordanCon… er… JordanCon, we performed a wee bit of crowd sourcing a while back—which is the fancy way of saying we posted on Facebook to see what previous con-attendees mentioned as the highlights for potential newcomers to experience.

In the interests of thoroughness, we have absolutely crawled the JordanCon Facebook wall to see what people are saying to those would-be-first-time-con-attendees-but-they’re-nervous-and-need-a-little-push-folks. Because we truly want to see you in April, newbies!

(Even though that previous paragraph sounds stalkery, we’re really not… unless “stalkery” is a euphemism for “exuberant,” in which case, hells yeah, that’s totally us—and we party well, too!)

Ahem. Anyhow. Here’s what we got from said stalkery…

In response to the question, “What are you most excited about for JordanCon?”

We asked previous con-attendees what they’d tell first timers, and we received a myriad of responses.

Here and there on the JordanCon Facebook group we see some brave souls sharing their vulnerable side, specifically their concern that they’d be traveling solo to the con. Take, for instance, Rand (whose name has been changed to protect the innocent).

Rand says, “I want to go soooo bad, but I’m wary because I’d literally be going alone and I wouldn’t know anybody there…”

Here’s how our JordanCon veterans replied:

That wraps up our list, folks—perhaps you spotted your own quote or maybe you’re a potential JordanCon attendee who’s now had your questions answered. Between the artists, authors, and apparel, the panels, parties, and people, there’s plenty to do and see and you’ll have plenty of new friends to hang out with while you’re at it.

Come and play at JordanCon, you won’t regret it.